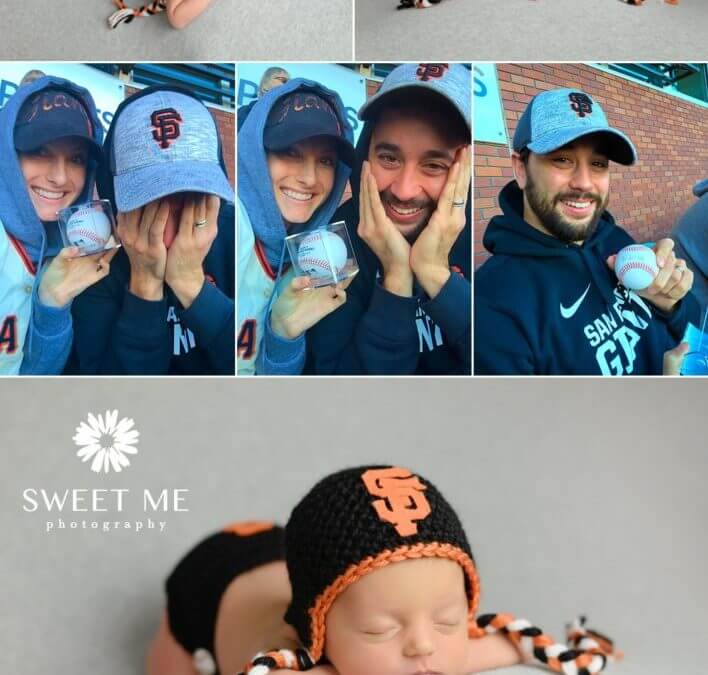 by Sweet Me February 5, 2017
Rave Reviews
Sometimes parents provide special props for their baby’s photo shoot. Sarah provided the cutest little San Francisco Giants hat for her baby girl. Of course, her Sweet Me photographer asked her about the significance of the hat and realized that there was a great love story behind such a tiny hat.
Sarah and her husband, Anthony, worked together in the same area of the hospital for years but never saw one another. One day, he walked into the operating room that she was working in and Sarah felt overwhelmingly compelled by God to ask him if he played baseball. “Hey, do you play baseball?”, she asked. That is when the love story began.
Four months into their relationship, Anthony took Sarah to a baseball game. His aunt works for the Padres so she graciously gave them a tour of the stadium before the first pitch went out. They had the unbelievable opportunity to be on the field when the Giants warmed up. Then, in front of Pence, Blanco, Bumgarner, and a few other players Anthony got down on one knee and proposed to Sarah near home plate! They were married a mere four months later in a wedding ceremony with the perfect themed mix of rustic country and, of course, baseball.

“My dad took me to all the home games at Candlestick Park and Anthony knew my love for the Giants. Anthony had played baseball all his life and had a true love for the game.”

It took several, struggling months of trying to get pregnant before their wish finally came true. When Sarah found out she was pregnant in April she knew just how to tell her husband… with a baseball surprise! She planned a surprise trip to San Francisco to go see the Giants play the Cubs. The seats were amazing and Anthony was blown away by such an unexpected occasion.

“Once the 7th inning came, and we sang the song, I took out a baseball and wrote that date on it. I showed it to Anthony and told him that was the day our child was at their first baseball game. It took him a little time to get it, but when he did that boy cried”.

So there you have it. Baseball, love, baby, and a beautiful story of how a life together began. We can’t wait to hear the future news of other players being added to the team!